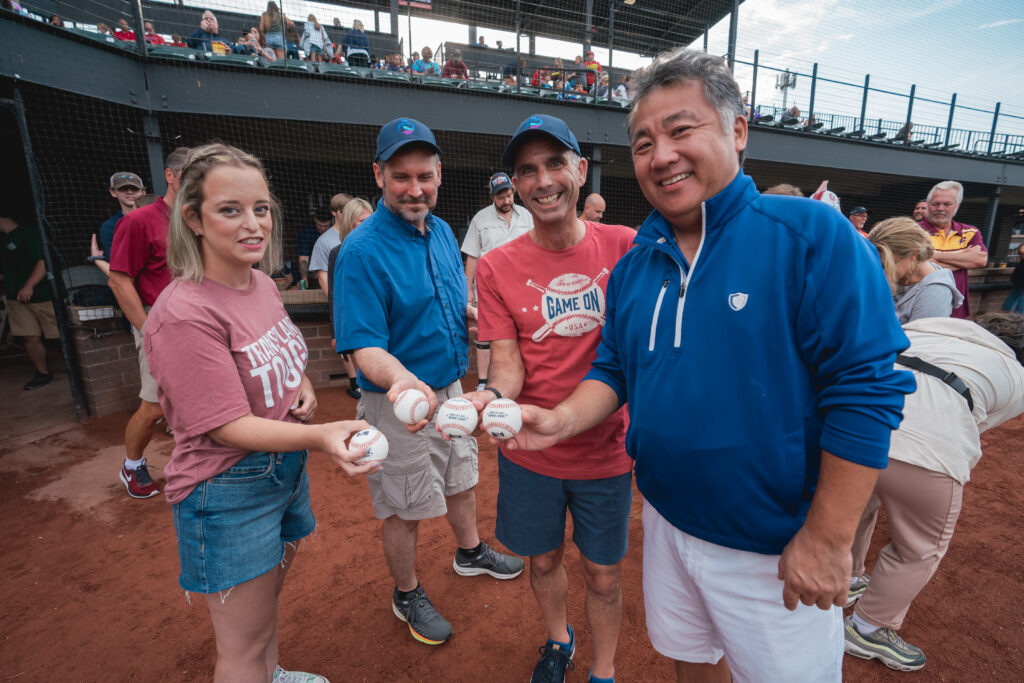 On Friday night, July 8 it was raining as 4,500 baseball fans drove to Jimmy John’s Field in Utica, Michigan to watch the Westside Woolly Mammoths take on the Utica Unicorns. But as they approached the field, the rain cleared and it turned out to be a beautiful night to play ball as well as increase awareness of living donor liver transplant. That night, our Living Liver Foundation partnered with Henry Ford Health for the first annual event to promote this life saving procedure. Before the game started, our crew threw out the opening pitches. The announcer shared with the crowd: “Tonight’s opening pitches will be thrown out by a group touched by living donor liver transplant at Henry Ford Hospital in Detroit: Dr. Atsi Yoshida, a liver transplant surgeon; Martha Stella, a post-transplant nurse coordinator; Mark Dybis, a living liver donor; and Dave Galbenski, a living donor liver transplant recipient.” This group is very special to me because they are my husband’s transplant team. Dr. Yoshida performed his living donor transplant surgery on November 25, 2019. Mark Dybis, my sister’s husband, donated a portion of his liver to Dave to save his life. And Martha Stella is the nurse who guides Dave through his post-transplant medical journey.

At the end of the second inning, a special 60-second video was shown to fans but it may not have been what they were expecting. This video featured the amazing story of Rick Foley and Fredo Pacheco as well as an illustration of how living donor liver transplant works. In 2018, Fredo donated a portion of his liver to Rick to save his life. Fredo didn’t know Rick but he worked with Rick’s wife at a Ford assembly plant. Rick’s wife had posted on Facebook that her husband, an employee at a General Motors assembly plant, desperately needed a liver. At that moment, Fredo somehow knew that we was going to be a match. He applied to be a donor at Henry Ford Hospital in Detroit, Michigan and the testing process began. Fredo tested well but there was one final hurdle he needed to clear. He was told he needed to lose 28 pounds before he could donate. With much determination, Fredo lost the weight through diet and exercise. Today, Fredo and Rick are both doing well and are good friends who joke about the fact that they work at competing auto plants. We were pleased that Fredo, his wife and four members of his family were able to join us for this first annual event. They sat just behind home plate. If you’d like to learn more about Rick and Fredo’s story, click here to watch a clip from CBS News. In addition to this touching story, the video included an interesting illustration which showed how a donor can give a portion of his or her liver to a recipient and it will grow to full size in about two months. It also showed that the piece that remains in the donor also grows back to full size in two months.

At the end of the third inning, Dave’s living donor and brother-in-law, Mark Dybis, was honored as the game’s home town hero. He and his wife were escorted to the field as the announcer shared: “Tonight’s home town hero is Mark Dybis of Grosse Pointe Woods, Michigan.  In 2019, Mark donated a portion of his liver to his brother-in-law to save his life via a living donor liver transplant.  In two months, Mark’s liver grew back to full size and the portion he donated also grew back to full size in his brother-in-law.  Mark is here tonight with his wife, Karen, and his daughter, Robin.” The crowd gave him and his family some well deserved applause. Mark’s appearance also served to show the crowd that you can donate a portion of your liver and live a normal life afterwards. And that the donor does not have to be a blood relative of the recipient.

We were also so pleased that one of the local TV stations sent a camera crew and reporter to cover the event. Channel 4 WDIV filmed a segment which appeared on the 11:00 p.m news that night and again on the 6:00 a.m. news the next morning. This support resulted in thousands more people learning about living donor liver transplant. For that we are truly grateful. If you’d like to watch the segment, click here.